How to Stop Getting Electric Shocks At Work 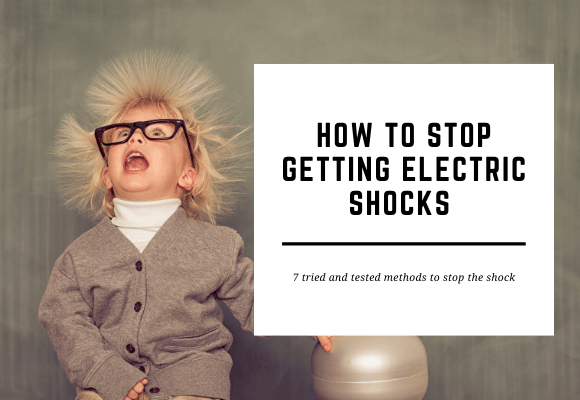 Posted in: Others
By Mat
No comments
More from this author

How to Stop Getting Electric Shocks At Work

7 tried and tested methods to stop the shock

It’s a weird one, electric shocks. Sometimes it’s funny to give your friends and family a static shock, but a full-blown electrocution from the clouds can be deadly. One thing’s for sure, though: however big or small an electric shock is, it is never useful to get one at work.

Standing in a warehouse all day or teaching classes of children, you don’t need the added stress of a potential static shock around every metallic corner. So, to make work life a little less shocking, here is our guide on how to stop getting electric shocks.

First, what is an electric shock?

An electric shock occurs because of the triboelectric effect. When two objects rub against each other, the positively charged protons jump from one to the other. The object they leave behind then takes on an imbalanced (static) charge.

When that object then makes contact with a new object, the electrons from the new object jump again to balance it out. That is when we feel a zap called static discharge. TED-Ed have a great video explaining how and why electric shocks happen.

And what’s their problem?

Most of the time, a static shock won’t bother you. Getting a shock from grabbing a doorknob or someone’s hand is a little unpleasant, but it usually doesn’t affect your life much afterwards.

In other conditions, electric shocks can be much more harmful, and sometimes even fatal. In coal mines and other enclosed spaces, static shocks can cause explosions and fires – often leading to death and destruction.

If your workplace is prone to dangerous static shocks, you likely already have safety mechanisms in place. For anyone working somewhere that sees minor electric shocks, the following actions might help to reduce the occurrences to zero.

How to stop getting static shocks at work

1. Go au-naturale with your fabrics

Some fabrics, like nylon and polyester, conduct electricity really well. You are more likely to get a static shock wearing them because those electrons we mentioned earlier love great conductors.

For anyone working in places where electric shocks would be dangerous, specialised anti-static clothing is an essential safety precaution. Anti-static clothing has non-conductive materials woven throughout, stopping electrical charges and reducing shocks and sparks.

As well as specialised clothes, many people working in electrically charged environments will be given anti-static wristbands.

Anti-static wristbands work by redirecting static electricity to a specific safe place, and away from the body or other random objects.

These are controversial, with a prolific study from NASA discrediting their effectiveness. But, despite their controversy as a safety feature, you might decide that an anti-static wristband is effective for a scenario where minor static shocks are a nuisance.

Ideally, you would move your entire office to the Maldives, but that is sadly not an option for many of us. A humidifier is the next best option, though, so anyone working in a dryer climate might benefit from adding humidity that way.

Humidifiers work by adding moisture to the air. As water is a great conductor, having it all around a room spreads out static electricity, preventing electrons from hurriedly jumping onto one single object.

Manufacturers claim that maintaining a humidity of at least 45% will prevent electrostatic discharge.

Just like adding moisture to the air stops the shock, moisturising your skin might also help. By hydrating your skin, you prevent the electrons from hanging around and distribute them across the surface and throughout your body.

Hand cream is particularly useful because your hands are the most sensitive and likely to touch other objects. Keep some on your desk and use it every time you wash your hands.

Rubber is one of the best-known insulators there is. Because of this, it is a common misconception that wearing rubber shoes will save you from static shocks.

The idea is a myth, however, because most shoes are not thick enough to adequately prevent static shock. Also, it is likely that rubber-soled shoes contain other materials unless they are safety shoes.

As we all know, metal is a great conductor. So, in the same way sitting in your car might protect you from lightning, with the metal exterior acting as a faraday cage, regularly discharging your electrons onto a coin can stop them from building up inside you.

Constantly touching a small piece of conducting metal can distribute electrons in smaller, regular amounts. That means any shocks will be tiny if you can feel them at all.

7. Invest in an anti-static mat

The absolute best way to avoid static shocks at work is to install anti-static matting underneath workstations or desks. Anti-static mats are made of conductive materials, that distribute the static charge evenly across their surface.

Our range of anti-static mats have other safety features too, so you can keep your workplace safe from shocks and other hazards. Non slip, absorbent mats for areas that might get wet and anti fatigue mats for anyone needing to stand all day.

If you are interested in anti-static mats but you’re not sure where to start, reach out to one of the matxperts for a helping hand in electric shock prevention.

How to stop electric shocks in the office

Electric shocks are annoying at best and dangerous at worst. The best way to stop static electricity from giving you a painful zap is to use a combination of these methods. Multiple layers of protection mean that if one fails, the others still have your back.

Combine moisturising yourself and the air with an anti-static mat and a preference for natural materials and you should soon notice that your electrons are much more chill.

If you want to know how to protect your hardware from electric shocks, check out this article on protecting your computers with anti-static mats.