How Anti-Static Mats Can Protect Your Computers 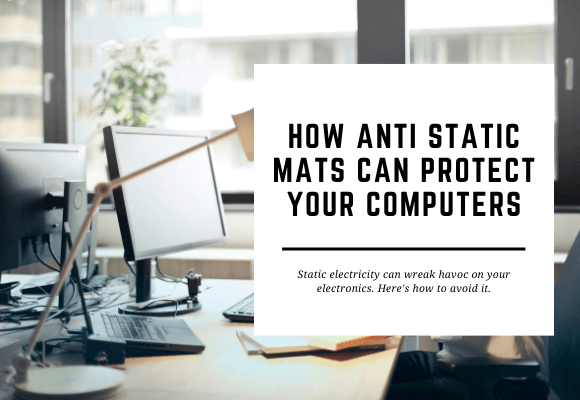 Posted in: News
By matshop
No comments
More from this author

How Anti-Static Mats Can Protect Your Computers

When it comes to keeping your computer safe from electrostatic discharge (ESD), there’s no better solution than an anti-static mat. An anti-static mat helps protect computer components, such as motherboards, CPUs, expansion cards and memory devices, that may be sensitive to static electricity. For any business that heavily relies on its computers, anti-static mats are strongly recommended. Even more so when the casings of these computers are regularly opened, such as for changing a hard drive or adding memory chips.

Whenever the casings of a computer are opened, it becomes extremely sensitive to static electricity stored within the human body. The internal workings of a desktop or laptop are very susceptible to static electricity, and if the hard drive is exposed even just a small amount, irreparable damage can be caused. Microchips too can be damaged with exposure to electricity as low as 10 volts. Because humans cannot feel the excess buildup of electricity in their bodies (caused by walking on carpets etc), it’s very hard to know that by simply touching your computer you could be doing it harm.

Static electricity is caused by a process called ‘triboelectrification’. Everything we see is made from atoms, and when two objects touch they can alter the atoms’ positive or negative charge. When an object touches another object with either an opposite or neutral charge, electrons flow. These moving electrons cause static electricity.

As human touch is one of the biggest culprits for transferring static electricity to a computer, it’s essential that precautions are made to ground the static electricity before any internal computer components are exposed. One of the most effective ways to do this is using an anti-static mat. Anti-static mats contain a conductive material that collects static, therefore they must be grounded or earthed.

This can be achieved by plugging into a grounded electrical outlet. An anti-static mat still allows ESD to flow across its surface but at a much slower rate. This slower neutralisation of ESD prevents damage to microcircuit devices that cannot accept a sudden surge of static charge from the device to the grounded mat.

Essentially, an anti-static mat turns static electricity into an electric circuit, which can then be carried away safely. For anyone even contemplating the dismantling of a desktop, an anti-static mat is an essential piece of equipment. Anti-static mats can also be used to lower static charge caused by a person walking and can give some relief to tired feet and legs at the same time.

What are the benefits?

Static electricity is known to cause system corruption and premature hardware failure, and should your computer be exposed to ESD most suppliers will void your warranty.

One of the most severe sources of static electricity is the “standard” mat chair, which often comes with a surface charge of 10 to 30 thousand volts. A person sitting on the chair works like a capacitor and stores the excess electrons in their body. This is until they touch a grounded object, which more often than not is their computer keyboard or mouse. Over time, this weakens the system, eventually leading to permanent “hypersensitivity”. The benefits of an anti-static mat include: