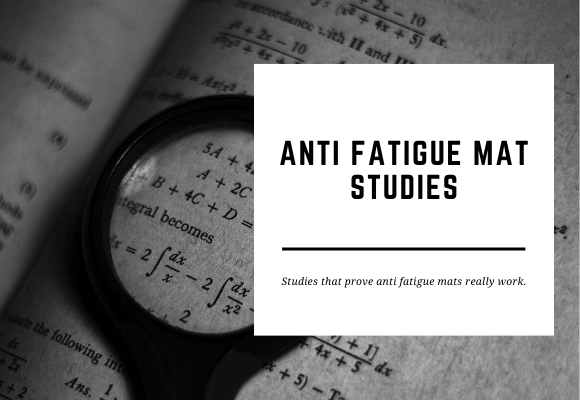 Posted in: Anti Fatigue mats
By Matly
No comments
More from this author

With all the new pieces of tech making all sorts of claims, it is hard not to be sceptical about what is worth your money. To confuse us more, some products that look like bargains end up being nothing more than junk.

There are loads of products out there that claim to make standing all day more comfortable, but not all are made equal. Even between styles, there are some options that are more effective.

To help you decide if anti fatigue mats are worth it, we have collected the anti fatigue mat studies that prove they work. These are all clinical trials, so first let’s explore why we can believe their results.

Why should we trust clinical trials?

Many people find it hard to believe studies because we hear of results that are disproven, biased or over-generalised. While some ‘studies’ are undoubtedly rogue, clinical trials that are published in scientific journals are rigorously controlled so they cannot be.

All studies must satisfy a list of criteria that make sure the results of clinical trials can be stated as fact, including:

1. Based on past research

At the start of any journal article, the researcher must justify the reasons for their study. This includes justifying the use of treatments and interventions, the existence of the problem being researched and the effectiveness of the design of the study.

Anything they are studying must be grounded in research done before, so a study on anti fatigue mats effect on back pain must first explain past research that found back pain to be a problem and flooring to be a cause of this problem.

Clinical trials are conducted on a sample that is large enough and similar enough to the population of interest that the results can be generalised with confidence.

For example, a study on anti fatigue mats must use a sample of participants similar to those people that would use an anti fatigue mat. It would also have a large and varied enough sample that the results cannot have been generated by chance.

To be certain that the results of any study were the result of any variable, anything else that could affect the outcome need to be controlled.

For example, if we are trying to work out if anti fatigue mats improve back pain, we must ensure that time spent standing, shoes worn and anything else that might improve or worsen back pain are controlled in the study.

4. Compared to a Control Group

The other main way of ensuring that the results are truly caused by the item or action being tested is to include a control group. The control group will complete the same trial as the other (experimental) group, but without the item being tested.

For example, participants in the control group of an anti fatigue mat study would stand on the floor or a normal mat. A normal mat would be preferable in this case, to make the study blind.

The best clinical trials are blinded, which prevents participants from falling for the placebo effect. The placebo effect is when a participant thinks they are receiving an intervention (such as a medicine or an anti fatigue mat) so perceive an outcome to happen.

For example, having the control group stand on a mat that looks identical to an anti fatigue mat would stop the placebo effect causing participants to think they must be in less pain.

Finally, to ensure that every trial follows the above rules (and any others that might be relevant to their study) every report is rigorously reviewed by other experts in the field.

That means each study submitted to a scientific journal is picked apart by people trying to disprove the theory or intervention being tested. For that reason, any study that makes it to publication is guaranteed to be precise and accurate, and therefore trustworthy.

Some studies do not follow the RCT design, which means they have a different set of rules to follow. A field study, for example, would not use a random sample of the population of interest, because the participants would be there already.

With all these factors being needed for every study, and each study building only slightly on its predecessors, the research process is a slow one. It does, however, give us confidence that a piece of research published in a respected journal can be taken as accurate.

Studies that have investigated whether anti fatigue mats work

The purpose of anti fatigue mats is to reduce discomfort, boosting productivity and employee satisfaction. The following medical concerns have been tested in clinical trials, proving that anti fatigue mats really do work.

One way to measure the more subjective experiences is to use a self-report method. Pain has no standard measure. Studies using self-report show why it is important that the people being tested fully represent the population of people that the study will relate to.

If we only test one gender, people that volunteer or workers from a specific warehouse, we risk choosing a sample that is more or less likely to report discomfort.

A study conducted in 2013 that investigated weight-shifting also found that discomfort after 4 hours of standing was significantly lower when stood on an anti fatigue mat. Discomfort in the lower leg was also much lower from the very first hour of standing on the mats.

This same study did not find that the strain on glute muscles was eased by anti fatigue mats, however.

An old study conducted in 1993 found that anti fatigue mats reduced fatigue in the back, but that the quality of the mats was important. The researchers here did not find that leg fatigue was significantly improved using mats.

As this was an early study, it had little research to build on but provided the groundwork for later research.

To ensure the most accurate information is presented, the results of all studies in a certain field will be evaluated together in an overview. This is called a meta-analysis (analysis of analysis) and is conducted once there has been enough research in an area.

Pregnancy complications are one of the most worrying dangers of prolonged standing, so it is not surprising that many studies have investigated solutions.

The same meta-analysis found that negative outcomes of pregnancy, such as a low birth rate, were associated with standing all day at work. No study looked at whether anti fatigue mats reduce this risk, so we cannot draw conclusions, but it will hopefully be specified soon.

Our answer to the question ‘do anti fatigue mats work’ is always a resounding YES. Anti fatigue mats have been proven time and time again to reduce the pain caused by prolonged periods of standing.

It isn't just warehouses that can benefit from anti fatigue mats. Office managers should consider standing desks with mats to improve employee wellbeing.

From lower back pain to muscle fatigue, it is clear that great quality anti fatigue mats can make jobs that require standing safer and more comfortable.

If you have any questions on anti fatigue mats and their suitability for your space, reach out to our team who will be happy to explore your options.

If you still aren’t sure if anti fatigue mats are worth it, why not try it out for yourself. Request a free sample from your preferred retailer or find your closest one here.